By now, you already know that technology is a fantastic way to connect and disconnect from others.  Look around you, it’s everywhere, every table, every meeting.  Every form of entertainment is at our fingertips and a false sense of social connection is just a click away.  While this is great time to be alive on this planet, easily connecting to those we just met, care about, or not...it is far from where we come from and is without a doubt, keeping most us isolated.

Close your eyes for a moment and imagine if you will... sitting outside with those you choose, around a fire and under the stars...sharing what you know or telling a tall tale or two.  This was how news was told before Television and parents made up story’s to help children from straying to far from them. (Think about little red and the big bad wolf). Passing information down to the next generation before it became lost was a common family trend around the table or fire, and too often, a grandpa might add a twist of exaggeration or two as it was retold each time over the years.  Unfortunately, we are slowly losing the charm of storytelling and if it wasn’t for Podcasts, *The Moth and other story-telling events around this globe, we might lose it all together. I want to bring back a bit of this early form of entertainment...if only to appease my self and share a bit of mischief of what I have in mind. I aim to share a story with you...one that has been brewing in me for quite some time along with some of my Art I have been producing for just as long.  My intentions are purely fun and hopefully, for you as well.


Grab a cup of coffee or hot chocolate, glass of mead or what you will and meet me under the stars, as I guide you into a world of playful antidotes, characters and odd fellows.  Let me show you what is behind that word, Fae, as we explore them in among the trees, streams and deep lakes, grass circles and dare I say it, all around you and me right now.

Learn with me what is behind the vail that is hard to explain and the quick flutter you see from the corner of an eye.  Of new story’s of very old origins in which you have always known to be true, deep in your being, to share with those you love around a fire or a long car ride.

So until we shall met again...Keep your eyes open as you can only trust half what you see until you know for a fact and then...whatever you do...Keep it wild


*The Moth, Art and Craft of Storytelling
The Moth was founded in 1997 by poet and novelist George Dawes Green, who wanted to recreate the feeling of sultry summer evenings in his native Georgia, when moths were attracted to the light on the porch where he and his friends would gather to spin spellbinding tales. (According to Wikipedia)

More information about The Moth can be found here:

Fae is an abbreviated word from the source of Fairy or Faery, but also derived from metaphysical, supernatural, or preternatural explanations (that which is not easily explained in Logic terms) such as Angels and Demons.  Source from many types of mythical being or legendary creature in European folklore (and particularly Celtic, Slavic, German, English, and French folklore)
Myths and stories about fairies are a collection of folk beliefs from all cultures around the world to help explain the “unbelievable.”


And just so you know: These tidbits I am going to share with you are based on factual accounts, myths and legends. It has been my quest, to find those secret doors that lead to the mystical unknowns, and I am among a few lucky ones to have been picked to tell you their story. Let a comment if you dare to share your sightings, but please, don’t hurt the messenger.

Fae Findings among the Courts. Description of what you might find when looking for Faeries and other Fae Folk

When the leaves fall from trees, the beavers begin storing fat for the long winter ahead. Soon a cold blood moon rises, making way for hunters to easily see the fox who come to graze on fallen grains. Winter is close and this full very moon is a sign for those who gather in the forest to discuss the past year events and plan for the future.  Late into the night, each and every month, the chosen fae appear, long after the wee ones settle for bed.  This is called Seelie or Unseelie Court, depending on the time of year. Spring, Summer and Winter are controlled by the Seelie Court. Autumn is controlled by the Unseelie court, but monitored under the laws of nature according to the outlines and by-laws of the group in large. (Fae definition: mythical beings or legendary creatures in European folklore,  particularly Celtic, Slavic, German and English countries and often described as metaphysical, supernatural of just plain ol’ Fairy’s or Faeries).

The Seelie Court (blessed, happy, harmless and silly), is seen as more tolerant toward humans. (German selig, Old English sælig and Irish it is spelled seleighe). The fae of this court do not like to be in debt and are known to warn humans who had accidentally offended them in one manner or another, and are generally kind. They are prone to a bit of fun-mischief but forget rather quickly what they did to you and then proceed to seek out help for you instead. The most common time of day to see them is twilight and sometimes right at dawn. They control the courts except for Autumn, which is primarily controlled by the Unseelie Court.  Too many to list, but some of these are known as Elves, Brownies, and Hobgoblins. They are friends of birds, mostly blue jays and butterflies.

The Unseelie Court, (Unholy or Unblessed) consists of the malicious and more evilly-inclined faes. Unlike the Seelie Court, they are easily provoked to harm their foes or anyone they choose and often find it amusing. As a group, or the “host,” as we Fae call it, they prey mostly at night and assault travelers either physically, emotionally, and/or mentally– especially those who are inclined to be “spiritually ignorant folk.” Like the faeries of the Seelie Court, they would rather avoid the larger evil ones, with this exception: when one of them is forced to choose, they will naturally prefer to harm than help.  they are often seen along ogres, some misguided gnomes and other strange animals, moths and such. Beware of the Lake Maiden and the Mountain Hag, known as Gwyllion. They are smart and know how to lure the faes who have not decided to chose a court (solitary faeries), to join their side.

One who Protects the Seelie and Un-Seelie Courts

Perched high in the trees above the gathering is a Valkyrie.  She is from a strong blood line and her only job is to make sure that those who serve in the courts, are protected. If there is danger or a wondering human folk below, she will call out much like a Raven to warn those of the Shining Throne, however, has been known to attack if the opportunity takes a turn for the worse.
Valkyries are stronger than most fae, therefore, her position is of high value and only those who are from her kind can replace her if she is lost.  She is committed to keep peace. Not only is she a fierce fighter, but a guide to the “Hall of the Slain.”  (The world beyond for those who have died on the battlefield).
Known as a peculiar women and almost always left alone, she prefers to live among the common folk, usually near a town or small village.   She primarily speaks in verse and is shy around babies (human and fae babies have insight into the spirit of another), and is uncommonly beautiful and tall.  Often attracting men folk, in which if she decides, may choose a mate for one offspring.   No one knows how long she can live, but legend states over a thousand years.

If you are wondering, it is not uncommon to see a fae in Urban surroundings, but most prefer to live in woodland communities, underground kingdoms, lakes, hills, moss covered stones, and especially...most certainly...grass circles.
You never know what lurks in the dark and far into the woods... This Valkyrie is but one of the delightful creatures that I have gone to great lengths to find and share my Art with you. I am certain, the more you learn of the delightful creatures, the more you will begin to believe.

But be fared warned dear reader: when you do...and you will...
Let it not surprise you to see something flutter from the corner of your eye.

Until we met again... Come follow me, and learn more, as I do, about the wee faery folk.

By now, you already know that technology is a fantastic way to connect and disconnect from others.  Look around you, it’s everywher... 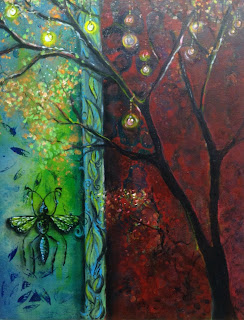 Muse-Lings Newsletter
Five or so years ago, I developed a body of Art for representation. I had been a commission artist for years, developing beautiful works of art that is another’s vision. When I decided to create my vision, a delightful story had emerged. In doing the research for this adventure,I have come to understand happiness through the eyes of my character, Abigail Fawn. These tidbits of muse writings and information is what I have found. I do hope you enjoy and decided to follow along.